Javascript must be enabled to download our products and perform other essential functions.

What is Ping Monitoring?

Ping Monitoring is a practice of periodically pinging a computer or device, and then sending alerts if a ping response is not received, or if it is received too late. 'Pinging' is done by sending a special network packet to the target device, and then it responds back with a response packet. The time between sending the packet and receiving the response is the 'ping time', and is usually measure in milliseconds.

Monitoring ping response times indicates how fast and healthy the network is, and if the target device is able to send a response. If no response is received, it usually means the device is down, turned off, or not connected to the network.

Many software solutions exist to periodically ping all of the devices on a network to ensure they are up. If a device doesn't response, IT staff is then notified to investigate the problem.

On a busy network, it's not uncommon for an occasional ping response packet to get lost. Because of this, it's important for the monitoring to take this into account, and only alert after two or more ping responses have not been received. 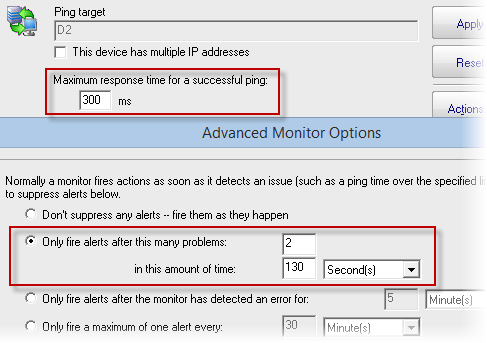