How to Choose a Linux Distro for Your Server

Whether it’s for network and system administration, database management, web services, or other business functions, chances are you’ll need robust servers as part of your IT infrastructure armory. Traditionally, a server running a Linux operating system has been the preferred option for enterprise use. But which Linux distribution (or distro) is the right one for your particular use case?

Why Linux Is the Preferred Choice for a Server

A number of characteristics inherent to the Linux environment makes it especially suitable as the operating system for a server. For one thing, Linux servers have an established reputation for stability, with the potential to maintain extensive periods of uptime without the need for rebooting. The operating system is also generally considered to be more secure than either Windows or macOS.

Being an open source medium, you can get a Linux distro from numerous suppliers. You have greater freedom to choose the mix of features and functionality that best suit your particular circumstances or to tweak an existing installation and customize it to your needs.

In terms of pricing, some Linux servers are available for free, while other vendors will impose a charge for supplying a custom-tailored OS. Most of the free distributions also offer paid support services. Each Linux server distro provides its own unique set of features and suitability for various business functions. 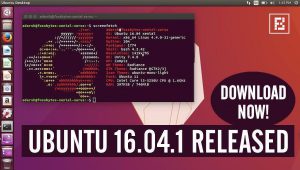 Ubuntu LTS has a substantial market base, especially in the cloud, where its support for OpenStack makes it a popular choice for both private and public deployments. It’s characterized by a long shelf life and a range of options that extend to the needs of a wide range of businesses. But it also performs well as a regular file, web, or database server.

Ubuntu LTS 16.04.02 is a stable release based on the Linux 4.4 kernel that’s supported for five years. This gives administrators the assurance of access to bug fixes on demand, without the need to install major updates that might cause instability. The “LTS” stands for Long-Term Support.

In the public cloud, there are certified images for most providers, including AWS, Azure, Google, and Rackspace. If you’re looking to transform physical infrastructure into a cloud, Ubuntu’s Metal as a Service (MAAS) is available with support for Windows, Ubuntu, CentOS, RHEL, or SUSE and existing DevOps tools such as JuJu and Salt.

Server management may be accomplished from the command line or from a third-party GUI like Webmin. Alternatively, the Ubuntu Landscape management tools provide a Web GUI that enables users to manage, deploy, and monitor thousands of Ubuntu servers.

The Ubuntu server distro is free, but the Ubuntu Advantage solution gives users access to the Landscape online management console, live patching, the Ubuntu Assurance program, and various support options. As of 2017,

you should budget for at least $750 or $1,500 per server per year for the Standard and Advanced options, respectively.

Note that if you have multiple virtual or physical server instances, support costs may escalate quickly. 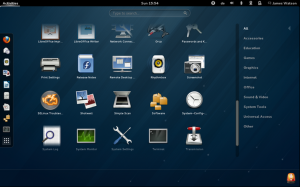 Sponsored by Red Hat, Fedora Server 26 is maintained by the Fedora Project as an independent distro in its own right. Rather than an LTS approach, Fedora focuses on providing a server with a short life-cycle that gives administrators access to the latest tech without having to wait for major upgrade cycles. New versions of Fedora have generally been released twice a year for the past several years. Automatic updates also include the latest in Linux security.

In line with other Linux distros, Fedora management can take place via the command line, from a GUI like GNOME or KDE or through the Cockpit management interface (which is included in the Fedora installation routine). Cockpit may be launched from any web browser by using the server IP address and a custom port. With the Fedora Rolekit tool, administrators can deploy and manage prepared server roles, eliminating the need to configure servers from scratch.

Online documentation is comprehensive and available in PDF format for offline reading. A community knowledge base and various other forums compensate in part for the lack of paid support. 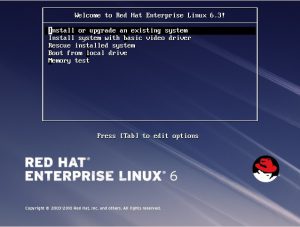 Red Hat claims that 90% of the Fortune Global 500 uses its products, and Red Hat Enterprise Linux (RHEL) is their flagship in this arena. The server package boasts a comprehensive suite of cloud computing tools, including the Red Hat Cloud Infrastructure, a cloud management option enabling users to build and manage their own cloud solutions. Management across multiple public cloud providers and hypervisors is facilitated via Red Hat Cloud Forms, and RHEL offers support for the popular OpenStack cloud platform.

Developers looking to create cloud applications can benefit from OpenShift, Red Hat’s Platform as a Service (PaaS) option. Customers with existing subscriptions can migrate to the cloud through over 100 certified cloud providers.

On installation, users can make all of their desired selections from a configuration panel at the start, and the install program will then run to completion without requiring further input. Red Hat offers a choice of six base server environments, including minimal server, a server with GUI, and a basic Web server. You can customize installations by adding DNS, databases, other server roles, and various tools.

The Red Hat Satellite management tool provides a unified dashboard which enables users to configure, provision, audit, and manage software updates for thousands of servers. But keep in mind that just the framework for Red Hat Satellite will cost you around $10,000 a year. And the Smart Management Add-On subscription for each system under Red Hat Satellite costs an additional $200 per server.

At the more modest end of the price scale, a basic Red Hat Enterprise Linux server with self-help support will set you back around $350. With basic support, this rises to around $750. Red Hat Enterprise Linux for Virtual Datacenters (starting at $2,499 with standard support) is recommended for organizations that run a lot of guest VMs. Customers put off by the enterprise-level pricing can use a third-party tool like Cockpit for management. 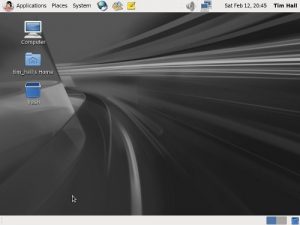 If you’re already using Oracle products, this is the one for you. Oracle Linux integrates fully with Red Hat (on which it’s based). There’s also support for two different kernels, and OpenStack tools for building cloud-computing platforms.

Several of the company’s web sites, including Oracle Cloud and some of its Oracle Engineered Systems run on Oracle Linux, which has been tested and optimized for use with other products from their stable such as databases, and applications like Secure Enterprise Search, Fusion Middleware, and the E-Business Suite.

OpenStack comes as a free download which can be used to manage both physical and virtual servers in Oracle Linux production environments. There’s tight integration with Oracle Cloud and its Platform as a Service (PaaS), Infrastructure as a Service (IaaS), and Software as a Service (SaaS) offerings.

Like Red Hat and Fedora, the Oracle installation routine can be pre-configured with all of your user options, enabling administrators to choose various roles and supporting software before the program starts. Oracle Linux installs with the standard Linux kernel, so you’ll need to install the brand’s Unbreakable Enterprise Kernel (UEK) separately, if that’s your preferred environment.

If you only need to access one server at a time, you can manage Oracle Linux from the command line or a third-party GUI like GNOME. However, most installations will probably use the Oracle Enterprise Manager, which is offered at no additional cost to paying subscribers. Enterprise Manager runs on-premises and provides a unified platform for overseeing both on-premise and cloud Oracle deployments—including Oracle Linux, databases, applications, middleware, hardware, and engineered systems.

The Oracle Linux server distro is free, but there are paid support packages available. Both the basic and premium options offer 24/7 support in 145 countries and in 29 languages. Basic support starts at $499 per year, with premium support starting at $1,399. 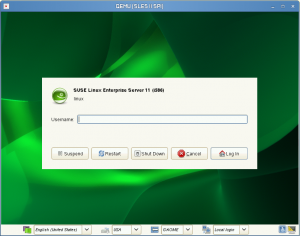 SLES 12 SP2 has an online installation tool which makes the server platform available through over 50 different cloud providers including Microsoft Azure, AWS, and Google Compute Engine. Using SUSE Studio, customers can build their own custom SLES server appliances online by selecting from a range of features. There are over 750 available packages, including tools for creating virtual appliances or for pre-configuring time zone settings and network information.

For management, SLES comes with the GNOME desktop already installed and boots to this automatically when you first start the server. It’s also possible to do command line management. The YaST (Yet another Setup Tool) is an integral part of the installation, which administrators can use to configure most aspects of a SUSE server such as hardware setup or to manage services like DNS, DHCP, FTP, and HTTP. YaST also has features for managing users and security features like certificates, firewalls, and auditing.

In multi-server environments, SUSE Manager provides a unified location for overseeing multiple Linux installations and virtual, cloud, and physical servers, including Red Hat servers. The SUSE Manager dashboard provides several on-screen reporting features, including online visualization of network infrastructure. You can install it as part of a regular SUSE Server installation or as part of the Just Enough Operating System (JeOS), which is a minimized host OS offered by SUSE for cloud images, container applications, or simplifying IT operations.

Free online and offline (PDF) documentation is available for most SUSE Linux Enterprise Server features. The server itself is free, with a number of paid support options after an initial 60-day free trial. Standard support starts at $799 per year per server, while priority (24/7) support costs around $1,499 per year per server.

Linux Distro Options at a Glance

To summarize your available options, and their plus and minus points as outlined above: 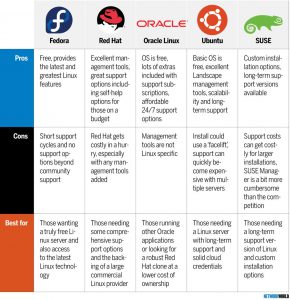 Ultimately, of course, your choice

of Linux distro will depend on your operating environment and the operational and business objectives that your server has to work toward.