There are many ways in which you would use this new Windows Server 2012 feature, but all depends on the infrastructure requirements and the purpose of the cluster. As a conclusion, you need to remember that Scale-Out File Servers are best deployed in scenarios where data manipulation is high and good performance is required.

I’ll not insist on the deployment of failover clusters because we’ve covered this aspect in previous articles so we’ll proceed with the deployment of a Scale-Out File Server directly. Note that I’ve already configured a two-node cluster in my VMware environment. Both machines have Windows Server 2012 installed.

The deployment of SoFS is similar to any cluster role deployment, you right click the cluster name and select Configure Role from the menu:

Select the File Server role from the menu and proceed further: 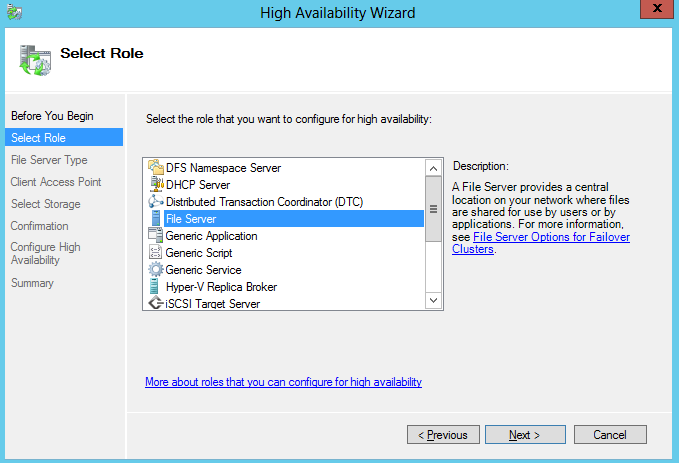 You are then presented with the two possible choices: File Server for general use and Scale-Out File Server for application data. A short description is provided for each of these roles: 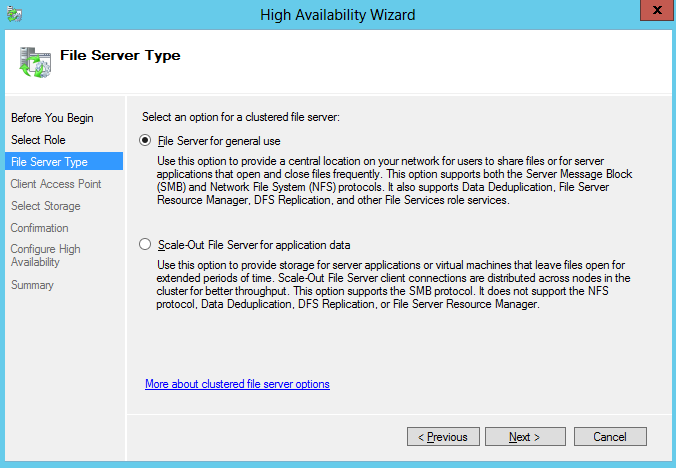 Select the Scale-Out File Server for application data and proceed further. The wizard will then prompt you to enter the name that will be used by clients to access this newly created role. The SoFS can also be configured easily using Windows Powershell by typing the following command:

You can now create and assing CSVs to the cluster and create shares for SoFS. Once the shares have been successfully created, you can use them for your Hyper-V or SQL machines to store data.

A network share for SoFS can be added by right clicking on the role and selecting Add File Share:

On a single cluster you can host multiple roles depending of course on your hardware configuration. For example, in our two node cluster we can also install and configure DHCP, IIS or SQL for high availability. But then what happens if a failure occurs in the cluster and the roles have to be failed over? Windows Server 2012 introduced a new feature called Startup Priority which allows System Administrators to specify what priority a role will take if a fail over is performed. Simply put, you can set the order in which roles will be moved and started on another cluster node. There are four priorities available, as follows:

By default a role will have a medium priority and if required, you can modify it from the Change Startup Priority menu:

The No Auto Start priority will move the role to another node after all other roles have been moved, but it will not start it automatically.

SoFS is a feature that really helped the way data is handled within a failover cluster and provides a high performance method of accessing shared data. One important aspect of Scale-Out File Server is that shares are available for all nodes part of a cluster and can be accessed simultaneously. This greatly increases the overall performance of your cluster roles which will behave as if a SAN device is used. You can host multiple roles within your clusters and roles such as Hyper-V, IIS and SQL can take advantage of the features provided by SoFS. Hope you’ve understood the principles behind this technology and that you now have skills in deploying and configuring Scale-Out File Servers. Please share your thoughts on this article and don’t hesitate to post any information/question that’s relevant for this topic.