A Quick Guide to Encrypted Messaging

With it now being so easy to share information, we have a tendency to over-divulge. We check into public places online, tell the world when we’re going on holiday and where, and send and receive risqué photos. However, when it became public knowledge that the NSA, internet service providers, and trusted social media platforms were able to monitor our private messages, the choice to share or not to share was taken away from us.

User data is a commodity, but what we allow companies to know should be left up to us. Due to growing alarm over misuse of user data, encrypted messaging systems have seen a sharp rise in popularity

Encryption isn’t new, but it is typically something the security-conscious have to do manually, making it infeasible for many casual technology users. Put simply, encryption is a security measure that takes plaintext data—i.e. something easily readable by human eyes—and transforms it into a series of seemingly-unrelated symbols, letters, or numbers. In order for the original data to be viewed, it must be reverted back to its plaintext form using a key.

There are two main types of encryption: public key and private key. They have the same intended effect—allowing certain data to only be viewed by an authorized party—but they achieve this in slightly different ways.

What Is Encrypted Messaging?

Encrypted messaging uses a method known as end-to-end encryption, which is briefly explained in the infographic below. 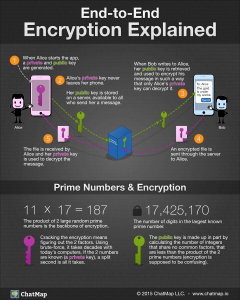 This means that if a message is intercepted or monitored by a third-party during transit, it will appear unreadable to them, making this system invaluable for the transmission of confidential information.

Data can be encrypted in transit, in storage, or using this all-encompassing end-to-end encryption. The latter tends to be the preferred method, as only protecting data in transit or in storage can still leave it somewhat vulnerable to tampering and surveillance by unauthorized parties.

Whether you’re dealing with a client’s personal information, or you just want to be confident that your private conversations remain private, encryption adds a crucial layer of security.

As shown in the infographic above, a simple text message goes through a series of steps to distort the message’s content. The content is then only revealed to individuals who have permission to view it, which is determined by the keys. When this level of encryption is applied to emails and official communications, the sensitive information gets securely bundled up for quick, safe transmission. 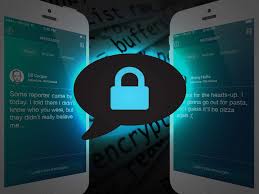 The standard messaging service provided by most cell service providers is unencrypted, allowing the service carrier to take a peek at their users’ conversations should they want to do so. If they choose, they can also then share that information with other companies.

for gleaning and sharing user information from what were initially believed to be private conversations. Facebook has now introduced an encrypted feature in Messenger, in which users can choose to encrypt their messages and have them disappear a short time after being read.

Services like Slack remain a popular method of inter-office communication, but they are often unencrypted, making them less than ideal for businesses that deal in sensitive information such as passwords. A recently developed browser plugin, Shhlack

, allows for end-to-end encryption of private messages, but so far encryption has not been implemented into the base product.

Which Apps Allow for Encrypted Messaging?

Many people assume that widely-used apps and services are trustworthy; they must be, as so many people trust them, right? But blunders by big companies like Facebook have illustrated how important it is to know which services are genuinely secure, and they are typically the ones that use end-to-end encryption.

Depending on your business or personal needs, you have a number of options to choose from. Too many abound to list comprehensively here, so we’ve picked out some of the biggest names. Due to the widespread need for these kinds of services, many of them are completely free. 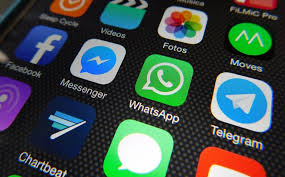 This is possibly the best-known service on this list. WhatsApp introduced end-to-end encryption in 2016 and has since been acquired by Facebook. All of the encryption is done for you, and the user experience is no different to using standard SMS. However, like all apps on this list, it uses Wi-Fi and mobile data rather than cell service to send and receive its encrypted messages.

This free app provides secure end-to-end decryption on iPhone, Android, and desktops. All communications—from text messages, to pictures, to phone calls—are encrypted, with not even the Signal developers having access to them. Users can schedule automatic message deletion to occur periodically.

This is another app that uses end-to-end encryption to protect your private messages and phone calls. It’s the second-most used encrypted messaging app after WhatsApp, with almost 1 billion users worldwide. Much like Signal, Viber cannot read your messages, and the company promises its users that it will not sell their personal information.

As always, we suggest doing thorough research when looking to try out some new software, particularly if it is going to be used in the transmission or storage of sensitive information. Thankfully, it’s not difficult to find secure apps for such purposes, with many now using end-to-end encryption as their default.