The Future of Data Centers 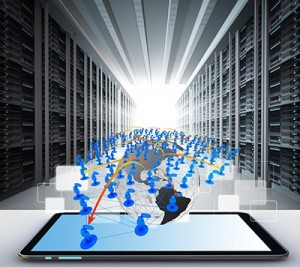 Digital, green and global technologies will likely be the three basic drivers of future markets. Both green and global are dependent on digital, so it’s worth considering what the path for digital may look like, in the coming years.

The Emerson Network Power survey, “Data Center 2025: Exploring the Possibilities” is an industry-wide initiative that raised key questions such as “What are the data centers of the future?” and “What can we expect from the data center by 2025?”

includes opinions and contributions from over 800 industry professionals across three continents, such as InterXion, Forrester, IBM and EMC. Its key findings may be summarized as follows:

Data centers are consistently expected to handle more capacity, deliver more availability, and use resources more effectively. The survey suggests that by 2025, due to more effective equipment, data centers will require much less energy to produce the same level of computing performance available today.

Yet, the overall consumption of power by data centers may increase, regardless of those advances. Historically, the demand for digital services has always outstripped technology. A switch to new power sources seems likely.

The Role of Renewables

Survey respondents predict that by 2025, data centers will move away from fossil fuels and adopt renewable energy solutions – particularly solar.

Solar power currently makes up 1% of the power generated in the US. By 2025, this figure could rise to 20%. But solar technology will need to evolve considerably in the next decade, if it’s to prove viable.

For example, a square-meter solar panel can currently generate about 600 kWh per year in Western Europe. So, to support power densities of a 6 kW/rack (an average rack power demand) would require ninety square meters of solar panel for each data center rack – without even factoring in cooling. The resulting size of the solar array would be almost double that of the data center itself.

Research from Microsoft’s Global Foundation Services suggests that data center engineers have begun to explore the possibility of powering a data center entirely by fuel cells built into the server racks. This would result in the power plant being brought inside the data center, and minimize power distribution losses.

The Technology of Mobile?

Peter Levine, a general partner at Andreessen Horowitz, has an even more radical proposal. He sees the mobile phone industry as the future hub of energy-efficient technology.

Mobile’s development of flash memory, smaller CPUs, networking hardware, and components for devices with small form factors has naturally resulted in lightweight processors (such as ARM) and low-cost, low-power elements all round. Levine predicts

these, as the foundation stones for the next generation: where the data centers powering our cell phones will be remade, using the same technologies that sit inside those phones.

In this vision, the data center of the future may consist of a set of cheap, cell-phone-like machines – all connected together with sophisticated software. With the units designed to operate at great temperature variations, these data centers will use much less power and probably less floor space per unit of CPU – at greatly reduced power and cooling costs.

Look to The Cloud

As cloud computing becomes more advanced, we’ll likely see a corresponding growth in cloud adoption by data centers. The Emerson survey projects that around 60% of computing will be cloud-based by 2025.

With more infrastructure hosted in the cloud, the enterprise data center may shrink in size, allowing greater flexibility in data center location. Smaller data centers could be sited in denser urban environments with higher real estate costs. Smart-city and smart-grid solutions could be an offshoot of this, with the possibility of re-using their waste heat. In the suburbs, businesses might deploy modular, pre-fabricated data centers, rather than using up office space.

The growth of cloud computing also means that data centers will be connecting to more and more external services and applications.

As high internet bandwidth becomes commonplace both at home and at work, the focus for enterprises will shift to creating new mobile apps and business opportunities. As mobile sales increase, the emphasis will be less on servers and the data centre, and more on building systems that are largely software-enabled.

The as-a-service model is expected to evolve, with applications being delivered from the cloud. Applied to cloud infrastructure, software-as-a-service (SaaS) will allow companies to try-before-they-buy directly from the cloud, greatly reducing or eliminating traditional development cycles.

By 2025, data center infrastructure management (DCIM) vendors expect data center management systems to deliver the control required for self-optimization. This paves the way for self-healing, with a level of automation and control that will enable a data center to function without human intervention in the event of sub-system failure.

Based on current trends, fully automated data centers are a real possibility by 2025.

In this climate, the role of the Chief Information Officer

(CIO) will also change – with more focus on identifying the strategic needs of a company and developing or specifying whatever IT will enhance products, services or markets. More of a visionary and advisory role. In fact, Gartner predicts that by 2015, about a quarter of all organizations will have a CDO or Chief Digital Officer, to reflect this shift.

It seems inevitable that we’re going to want to connect our data centers to more and more external services and applications. Which means that we need to start thinking ahead, to make sure we have the right structures in place, to do so.